An excellent precursor, summary background, of Zero Point Energy, leading to, but not quite recognized, Radius of Curvature of All Natural Law, the quantity C, the kinetic energy equivalent of the mass energy of matter, with it’s ease of mathematical and technological (SPACE-TIME-MASS-MATTER-ENERGY-FIELD) control and application.

Scientists Use Sound Waves To Levitate, Manipulate Matter
A team of researchers in Switzerland have developed a way of levitating and transporting small objects using nothing but sound. Using ultrasonic waves – that is, sound waves whose frequency is too high for humans to hear – scientists at the Swiss Federal Institute of Technology in Zurich have made water droplets, instant coffee crystals, styrofoam flakes, and a toothpick, among other objects, hang in midair, move along a plane, and interact with each other. Read More: http://www.whydontyoutrythis.com/2013/07/scientists-use-sound-waves-to-levitate-manipulate-matter.html 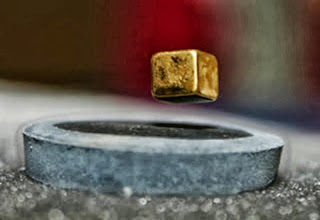 AND THEN THERE WERE THE PYRAMIDS, etc. .... TO CORAL CASTLE OF MODERN DAY http://www.youtube.com/watch?feature=player_detailpage&v=bPtvSaad0vU

Posted by Unknown at 9:32 PM No comments:

Reprinted with permission from SoundOff  http://theempowermentfactor.wordpress.com/

http://www.youtube.com/watch?feature=player_detailpage&v=EKtevjrZOGs
Notice that our torus is literally a double helix meeting end-to-end.

Further investigations into the Torus seem to reveal the operating mechanism to this universal pattern is the radius of curvature of all natural law, the quantity C, the property of Light, defined as the kinetic energy equivalent of the mass energy of matter.
.
This universal law also has its roots throughout ancient history, far more numerous and dominant than the Torus, and found in all parts of the world, the circle with the sine wave running though it.

The expanded view allow us to link up with the initial, extremely elementary, 100 year old definiton of our flat, E=mc2 science view, and upgrade our energy science toward a more meaningful, applicable, and evolutionary humane reality.

We can note that the incorporation of the universal pattern, the Torus, to the Radius of Curvature, the quantity C (light), was acknowledged by both Walter Russell and Barbara Dewey, concluded through their own interpretations.

Barbara Dewey: “The Eternal Blink (now, now, now) “electromagnetic waves, spiraling particles of matter-in-motion, a laminated quantum of spacetime, in a wave-like pattern going through the process of creation and destruction in the blink of Laminated Spacetime, surging ‘up’ positive, counterclockwise characteristics as they come into existence, and dying back, negative, clockwise characteristic as they expire (reflecting both the double helix and the Chinese tao); a condition where nothing existed (a blank) followed by a condition where everything existed once more (because of the great speed of these events – I have since put this at the speed of light – physical reality would appear to be a continuum while actually being an intermittently broken sequence of spacetime laminate. (of course, that blank wasn’t a blank at all, but the spaceless, timeless creating medium Holmes called the Universal Mind)”

Walter Russell: “The Radial Universe - The entire mechanical principle of Nature by means of which its light illusions of motions are produced, is the consequent effect of radial extensions. The seeming multiplication and division of the universal equilibrium into the opposed electrical pressures of gravitation and radiation, which form the foundation of this universe of change are made possible. Actions unfold formlessness into form, reactions refold form into formlessness. Actions are the basis of radiation. Reactions are the basis of gravitation……. The cube and sphere are one, being two opposite phases of the same thing. The cube is the sphere extended to black coldness while the sphere is the cube contracted to white incandescence. Within each cube is the curved universe of two-way light illusion; and beyond, to the farthest reaches of space, is a repetition of illusion from wave field to wave filed at the rate of 186,400 miles per second. That is the speed in which every action-reaction anywhere repeats itself everywhere. This illusion of motion gives rise to the belief that light travels.
Periodicity is characteristic of all phenomena of nature, stages of unfoldment and refoldmernt, (octaves) –gerero-activity begins at the birth of carbon in the first octave with genero-active, inner explosive speed of light, which is 186,400 miles per second. It ends with an equal radioactive, outer explosive speed. This speed is the limit at which motion can reproduce itself in curved wave fields before reaching zero where motion and curvature cease. 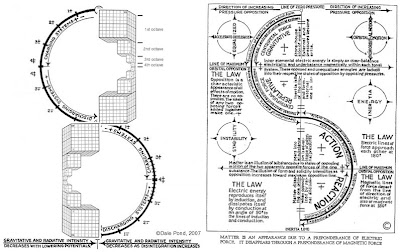 The Radius of Curvature permits greater comprehension towards specifically measured applications and possibilities.

BEYOND THE STALEMATE OF TALK AND THEORY, TO DEMONSTRATION AND APPLICATION is a question in need of more questioners, inquirees, and supporters, to bring the past due future within our grasp. The alternative is in the process of becoming NOW.

The Road to World War III:  For the good of our children – thinning out the population

Posted by Unknown at 1:28 PM No comments: