THE ASTONISHING SIMPLICITY OF EVERYTHING 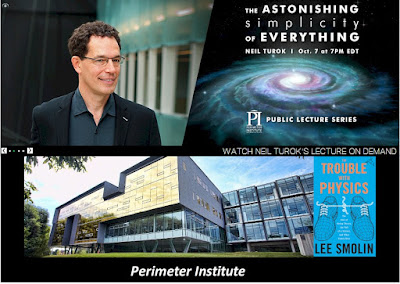 Fundamental physics has reached a turning point. The most powerful experiments ever devised are revealing the structure of the universe with unprecedented clarity. On the largest scales – the whole visible universe – and the tiniest, we are discovering remarkable simplicity, which our theories do not yet explain. In between, things are complex. But here too, new technologies are allowing us to access the quantum frontier, opening up new high-precision probes of the fundamental laws of nature and revolutionary new technologies. We stand on the threshold of breakthroughs, both theoretical and experimental, which could change our picture of the world and the development of our society.
On October 7, Perimeter Institute Director Neil Turok will open the 2015/16 season of the PI Public Lecture Series with a talk about why he is so excited about the future of physics.

Preface the above statement with the below findings and

11-year cosmic search leads to black hole rethink
One hundred years since Einstein proposed gravitational waves as part of his general theory of relativity, an 11-year search performed with CSIRO's Parkes telescope has failed to detect them, casting doubt on our understanding of galaxies and black holes.
phys.org

Kajita, McDonald win Nobel physics prize
Takaaki Kajita of Japan and Arthur McDonald of Canada have won the Nobel Prize in physics for the discovery of neutrino oscillations.
phys.org

The topolariton, a new half-matter, half-light particle
A new type of "quasiparticle" theorized by Caltech's Gil Refael, a professor of theoretical physics and condensed matter theory, could help improve the efficiency of a wide range of photonic devices—technologies, such as optical amplifiers, solar photovoltaic cells, and even barcode scanners, which…

If you want to understand the universe, you need to understand plasma... The Resonance Project • The connected universe • The Mind Unleashed • Collective Evolution • Physics Today • (post by Jamie Janover)
Nassim Haramein