Liquid Fire (Kundalini) - thousands of years old, but still strange to the majority in the 21st century. Nothing less than an "oil" energy mentality, aided by primitive nuclear vision, a stale E=MC2 equation, bounded with an 'idle' standard model, can so minimize, reduce our vision of reality and economics, as to still hinder our capacity to create sustainable life for all.
.
FTL, field propulsion, antigravity (upgraded versions of E=MC2) also remove the strangeness from Liquid Fire, providing a broader scientific base and fundamentals to include the constantly blinking in and out of existence of the very big and the very small, meeting at infinity, through the zero point of the yin yang in the double torus of radius C (Light).
.
Andrew Greeley, New York Times described the awakening Kundalini state quite well: "......... extraordinary experiences - intense, overwhelming, indescribable are recorded at every time in history, and in every place on the globe and are widespread in American society today. No one with any familiarity with history or anthropology or psychology can deny they occur. They are a form of "altered states of consciousness" - to use the current approved phrase - something like intoxication or delirium or a hypnotic trance but different in their intensity, their joyfulness and their 'lifting out' dimension. In some cases, such experiences were triggered by drugs, in others by ritual dances, in others by disciplined meditation; but most such 'ecstatic interludes' about which we have accounts seem to be purely spontaneous - a man casually walking by a tennis court is suddenly caught up in a wave of peace and joy 'as time stands still'.
.

An Introduction to Kundalini

Kundalini is essentially an evolutionary/energetic ‘boost’ we can gain with focused, meditative effort. It is referred to as an energetic ‘serpent’ because it’s coiled up in the root chakra, and it can be awakened - uncoiled up through each chakra - and used to find a permanently blissful state of consciousness. There are a lot of benefits to awakening it, and a lot of setbacks if we aren’t prepared.      WAKEUP-WORLD.COM
.
A review of the basic, simplified factors of the Natural Laws - space, time, mass, matter, energy, gravity, fields, to include The Radius of Curvature of All Natural Law - Light, the quantity C, is in order - as much so as the perception from a 'flat' earth, to one that is round was necessary.
.
Let the reader look at the very big, the very small, and perhaps derive self discovery of the larger nature, a unity of space and time, energy and consciousness.
.
Barbara Dewey's The Theory of Laminated Spacetime, Walter Russell's Light, and Nassim Haramein‘s The Fractal Holographic Universe with micro/macro black holes can provide additional assistance in understanding.

Radius of Curvature of all Natural Law:
Posted by Unknown at 5:37 PM No comments:

Major development in the understanding of macroscopic quantum behavior 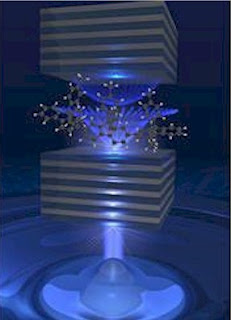 Quantum objects visible to the naked eye.
For the first time, the wavelike behaviour of a room-temperature polariton condensate  has been demonstrated in the laboratory on a macroscopic length scale. Quantum mechanics tells us that objects exhibit not only particle-like behaviour, but also wavelike behaviour with a wavelength inversely proportional to the object's velocity.

A trap for half-light, half-matter quasi-particles
Placing particles in the same state to obtain a condensate normally requires the temperature to be lowered to a level near absolute zero: conditions achievable only with complex laboratory techniques and expensive cryogenic equipment. "Unlike work carried out to date, which has mainly used ultracold atomic gases, our research allows comprehensive studies of condensation to be performed in condensed matter systems under ambient conditions" explains Mr. Daskalakis. He notes that this is a key step toward carrying out physics projects that currently remain purely theoretical. To produce the room-temperature condensate, the team of researchers from Polytechnique and Imperial College first created a device that makes it possible for polaritons - hybrid quasi-particles that are part light and part matter - to exist. The device is composed of a film of organic molecules 100 nanometres thick, confined between two nearly perfect mirrors. The condensate is created by first exciting a sufficient number of polaritons using a laser and then observed via the blue light it emits.

SPACE TIME MASS MATTER ENERGY GRAVITY (including all their variables and relatives): A change to one causes changes to the others, especially noticeable at high energy differentials, OR SCALE VARIABILITY - micro, meso, macro, between any two or more specified reference points ..... predictable, controllable, substitute-able/transformable , and measurable by the quantity C.

Relationships, Substitutions, transformations, across the micro, meso, macro scales (measurable, controllable) by Light, the Quantity C, the Radius of Curvature of all Natural Law:  absolute zero, excitation, frequency, spin, angular velocity, momentum........... to name just a few of the countless previously unknown transformable relationships recently discovered - as I have  continuously provided in these posts -  especially to the property of the simple CRYSTAL's capacity to transform one form of energy to another.

Atoms ....to ....Galaxies , Flickering under the Radius of Curvature of All Natural Law, ruled by Light, the Quantity C, in E=MC2.

Light, the quantity C, the kinetic energy equivalent of the mass energy of matter, is the RADIUS OF CURVATURE OF ALL NATURAL LAW in E=MC2, revealing a much clearer and unified picture, concept, of space, time, mass, matter, energy, gravity running through a unified micro, meso, macro perception. Freezing atoms puts them into the lowest possible energy and is a step towards harnessing the strange effects of quantum physics, which allow objects to exist in different states at the same time.
"Besides finding an easy way to create atoms with zero-point energy, we have also managed to put the atom into a highly counter intuitive state: where it is both moving and not moving at the same time," said Professor Hensinger.

Millions of black holes hidden behind veils of dust 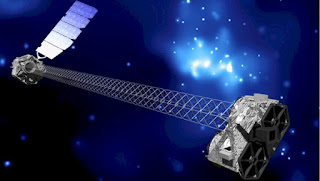 A color image of one of the galaxies targeted by NuSTAR, a telescope which has the ability to spot black holes obscured by dust and gas.    NASA/JPL-CALTECH
and the mini black holes are hidden by whaT?
The Fractal-Holographic Universe macro/micro black holes, gravity, torus, yin yang
Space-time itself naturally curves towards infinity and zero volume always – and at all points. this may seem like a radical statement but actually it reflects the original scenario created by Einstein’s field equations: the presence of even one singularity with infinite curvature automatically implies that all other points of the continuum belongs to that extreme curve, hence the word’s etymological root, “singular”, meaning single - there is only one.

In the Macro:  Diamonds Linked by Strange Quantum Entanglement

“Seeing the Light”, the quantity C, the ‘curve’, the ‘radius’, the kinetic energy equivalent of the mass energy of matter will do that (broader self-realizations), much like turning the light on in a room, or cave if you will, the latter clearly referencing Plato’s Allegory of the Cave.
You will note how closely Plato’s Parable is related to vision, i.e., as one steps out of the cave the light initially blinds, until slowly one becomes accustomed to the light and begins to decipher, recognize the magnificence of a larger reality. Then, too, upon reentering the cave to shout the discovery to the roof tops of his still unchained fellow prisoners, one is initially blinded upon reentering the dark, affecting his shouts of glee to mostly unintelligible garble, which take some time to clear.
The chains in the cave have never been locked and the shadows are not real. Dare to LOOK?

Posted by Unknown at 4:38 PM No comments:

When reality takes on splendor

"There is no more beautiful experience than when the world expands beyond its accustomed limits. These are moments when reality takes on splendor."  Deekak Chopra, M.D. (1989), writes in Quantum Healing,

The Possible Human  ".........extraordinary experiences - intense, overwhelming, indescribable...........with the multidimensions of 'scale' described by fractals - chaos to order, point of view to viewing point, comes the capacity to confirm that faith and reason are not opposed, that science or knowledge is not disembodied from will and emotion, from values and life"; that knowledge does not disengage from wisdom and understanding as it proceeds from our own nature to UNIVERSAL NATURE - the UNIFIED SPACE TIME MASS MATTER ENERGY GRAVITY PROCESSES ACROSS SCALES...... before we delve deeper into the mathematical incompatibility of the statistical nature of Quantum Mechanics verses the Theory of Relativity with their respective, isolated limits blockading an awe-inspiring vision of the possible human.... read more


So how would a 'curved' standard model take us past the the imposed limits which are painting a fanatically bland, stale, and shallow spectrum of science, human potential and human evolution?

Light, the quantity C, the kinetic energy equivalent of the mass energy of matter, is the RADIUS OF CURVATURE OF ALL NATURAL LAW in E=MC2, revealing a much clearer and unified picture, concept, of space, time, mass, matter, energy, gravity running through a unified micro, meso, macro perception.

SPACE TIME MASS MATTER ENERGY GRAVITY: A change to one causes changes to the others, especially noticeable at high energy differentials, OR SCALES,  between any two or more specified reference points.

The 'BOOM!' (exploded) goes the rocket-ship - primitive, buggy whip views and applications of energy, propulsion, and E=MC2, are not the answer.

Is it possible to put Humpty Dumpty (stale standard model of physics) together again? The quantum spin Hall effect is a fundamental property of light Photons have neither mass nor charge, and so behave very differently from their massive counterparts, but they do share a property, called spin, which results in remarkable geometric and topological phenomena. The spin--a measure of the intrinsic angular momentum--can be thought of as an equivalent of the spin of a top. In the research published in Science, the team found that photons share with electrons a property related to spin--the quantum spin Hall effect.  The quantum spin Hall effect for electrons allows for the existence of an unusual type of material--called a topological insulator--which conducts electricity on the surface but not through the bulk of the material. The team was intrigued to learn that an analogy for these can be found for photons.
Though light does not propagate through metals, it is known that it can propagate along interfaces between a metal and vacuum, in the form of so-called surface plasmons involving evanescent light waves.
The group was able to show that the unusual transverse spin they found in evanescent waves was actually caused by the intrinsic quantum Hall effect of photons, and their findings also explain recent experiments that have shown spin-controlled unidirectional propagation of surface optical modes.