The Beam of Invisibility

Bright gleam of understanding spreading very slowly into the deep nature and character of light and matter.  This invisibility beam possibly leaked from reverse engineering in 1966 when info originally obtained: "Ordinary glass is just as dense as many metals and harder than most and yet transmits light quite readily. Most matter is opaque to light because the photons of light are captured and absorbed in the electron orbits of the atoms through which they pass. This capture will occur whenever the frequency of the photon matches one of the frequencies of the atom. The energy thus stored is then re-emitted, but usually in the infra-red portion of the spectrum, and so cannot be seen as light. There are several ways in which almost any matter can be made transparent, or at least translucent. One method is to create a field matrix between the atoms which will tend to prevent the photon from being absorbed.  (Such a matrix develops in many substances during crystallization.) Another is to raise the frequency of the atoms above the highest absorption frequency of the atoms....."

The Beam of Invisibility 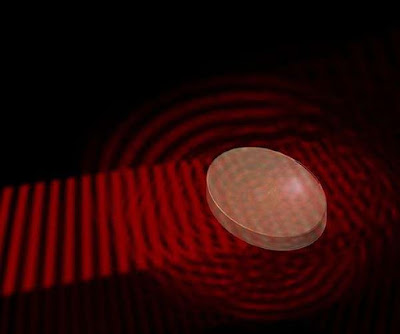 Vienna, Austria (SPX) Sep 15, 2017
Researchers from Vienna University, together with colleagues from Greece and the USA, have now developed a new idea for a cloaking technology. A completely opaque material is irradiated from above with a specific wave pattern - with the effect that light waves from the left can now pass through the material without any obstruction. This surprising result opens up completely new possibilities for active camouflage. The idea can be applied to different kinds of waves, it should work with sound waves ... read more