The broader the picture, the greater the simplicity with its attendent, ever superior, miraculous possibilities

ALWAYS: the broader the picture (gestalt) of reality,, the closer we approach the utter simplicity of everything ............. as simultaneously, the doors of reality open to ever greater, more astounding, miraculous, possibilities

As in the past, the analogy of a round earth (larger viewing point) offering more opportunities than a flat earth concept, so too the standard model of physics, especially E=MC2, would be well advised to perceive the 3D view and relationships of space time mass matter energy gravity (addendum end of post).

"..........this table appeared to look like a monitor screen with tens of billions of pixels, and with a good GPU it was quite possible to calculate all of these. 'We reached the speed we couldn't even dream of,' Vladimir Kukulin said. 'The program computes 260 million of complex double integrals on a desktop computer within three seconds only. We do in 15 minutes what the largest supercomputers in Germany do in three days. No comparison with supercomputers! "

One may well imagine the eventual outcomes as these slightly adapted personal computers are made available to all physics students. 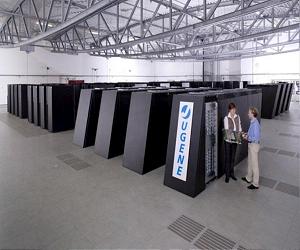 No need in supercomputers

A group of physicists from the Skobeltsyn Institute of Nuclear Physics, the Lomonosov Moscow State University, has learned to use personal computer for calculations of complex equations of quantum mechanics, usually solved with help of supercomputers. This PC does the job much faster. An article about the results of the work has been published in the journal Computer Physics Communications.

Senior researchers Vladimir Pomerantcev and Olga Rubtsova, working under the guidance of Professor Vladimir Kukulin (SINP MSU) were able to use on an ordinary desktop PC with GPU to solve complicated integral equations of quantum mechanics - previously solved only with the powerful, expensive supercomputers. According to Vladimir Kukulin, personal computer does the job much faster: in 15 minutes it is doing the work requiring normally 2-3 days of the supercomputer time.

The equations in question were formulated in the 60s by the Russian mathematician Ludwig Faddeev. The equations describe the scattering of a few quantum particles, i.e., represent a quantum mechanical analog of the Newtonian theory of the three body systems. As the result, the whole field of quantum mechanics called "physics of few-body systems" appeared soon after this.

This area poses a great interest to scientists engaged in quantum mechanics, nuclear and atomic physics and the theory of scattering. For several decades after the pioneering work of Faddeev one of their main purposes was to learn to solve these complicated equations. However, due to the incredible complexity of the calculations in the case of fully realistic interactions between a system's particles stood out of the researchers' reach for a long time, until the supercomputers appeared.

The situation changed dramatically after the group of SINP decided to use one of the new Nvidia GPs designed for use in game consoles on their personal computer. According to one of the authors Vladimir Kukulin, Head of Laboratory of Nuclear Theory, the processor was not the most expensive, of those that you can buy for $ 300-500.

The main problem in solving the scattering equations of multiple quantum particles was the calculation of the integral kernel - a huge two-dimensional table, consisting of tens or hundreds of thousands of rows and columns, with each element of such a huge matrix being the result of extremely complex calculations. But this table appeared to look like a monitor screen with tens of billions of pixels, and with a good GPU it was quite possible to calculate all of these. Using the software developed in Nvidia and having written their own programs, the researchers split their calculations on the many thousands of streams and were able to solve the problem brilliantly.

'We reached the speed we couldn't even dream of,' Vladimir Kukulin said. 'The program computes 260 million of complex double integrals on a desktop computer within three seconds only. No comparison with supercomputers! My colleague from the University of Bochum in Germany (recently deceased, mournfully), whose lab did the same, carried out the calculations by one of the largest supercomputers in Germany with the famous blue gene architecture that is actually very expensive. And what his group is seeking for two or three days, we do in 15 minutes without spending a dime.'

The most amazing thing is that the desired quality of graphics processors and a huge amount of software to them exist for ten years already, but no one used them for such calculations, preferring supercomputers. Anyway, our physicists surprised their Western counterparts pretty much.

'This work, in our opinion, opens up completely new ways to analyze nuclear and resonance chemical reactions,' says Vladimir Kukulin. 'It can also be very useful for solving a large number of computing tasks in plasma physics, electrodynamics, geophysics, medicine and many other areas of science. We want to organize a kind of training course, where researchers from various scientific areas of peripheral universities that do not have access to supercomputers could learn to do on their PCs the same thing that we do.'