The closer one approaches the moment of Now ...... reality takes on the splendor of pure creation.


As we edge closer to real on the 'time' perspective, surmised in the above article, and in this blog's previously discussed posts (About Time,  About That Time, or Lee Smolin's Time Reborn), opening doors to erroneously believed limits, we can find all the mysteries dissolve with a 3D version of E=MC2, acknowledging the constant C (light) as the Radius of Curvature of all Natural Law. 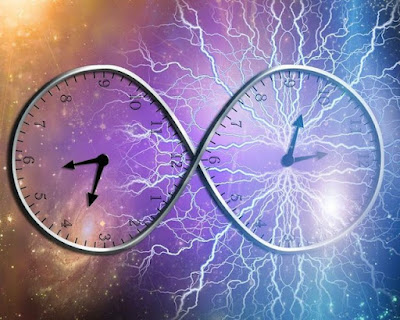 Everything exists in the present moment and it’s a fundamental principle of the Universe that many of our scientists are still trying to grasp. Time does not actually exist and Quantum Theory proves it. There are things that are closer to you in time, and things that are further away, just as there are things that are near or far away in space. But the idea that time flows past you is just as absurd as the suggestion that space does.

The trouble with time started a century ago, when Einstein’s special and general theories of relativity demolished the idea of time as a universal constant. One consequence is that the past, present, and future are not absolutes. Einstein’s theories also opened a rift in physics because the rules of general relativity (which describe gravity and the large-scale structure of the cosmos) seem incompatible with those of quantum physics (which govern the realm of the tiny).

According to Einstein’s special theory of relativity, there is no way to specify events that everyone can agree happen simultaneously. Two events that are both “now” to you will happen at different times for anyone moving at another speed. Other people will see a different now that might contain elements of yours â€“ but equally might not.

The result is a picture known as the block universe: the universe seen from that impossible vantage point outside space and time. You can by all means mark what you think is “now” with a red dot, but there is nothing that distinguishes that place from any other, except that you are there. Past and future are no more physically distinguished than left and right..... more

Dare We Inquire What is Beyond Our Field of Vision?

Dare We Inquire What is Beyond Our Field of Vision?

I Wonder Why: Why is light, the quantity C, the exact kinetic energy equivalent of the mass energy of matter? Your answer is the portal to the 3 D version of E=MC2, using the common denominator of frequency/vibration.

I noticed a post on LinkedIn today,  Energy Technologies, the year that was and will be , how stagnation in the 'new' energy field still runs the course.

And it certainly will, until a couple of simple issues, running counter to existing profit modules, are addressed. The longer the following simple concepts are ignored, the more foolish science will appear upon soon to arrive applications of FTL, antigravity, and entanglement options, such as, when appropriately deciphered,  "movement from one point to another, without going through all points in between", & etc. (easily noted, concepts requiring a 3D version of E=MC2 which enlarges and integrates our primitive concepts of space and time.)

One truly must rethink the early, antiquated, and massively erroneous interpretations of supposed effects between two reference points whose energy differentials approach, reach and exceed VC. The statements ‘As one’s mass becomes infinite, shortens in length, travels backwards in time, etc., etc. really requires a far more adult like explanation. There is more than meets the eye, when the light (which equates to the energy equivalent of matter),  is observed between any two specified reference points whose energy differential approaches, reaches and exceeds the VC differential. (Soon we will find the contemporary explanations, uttered with extreme confidence, to become the biggest joke science ever believed -  Ask a Mathematician / Ask a Physicist  Q: What would you experience if you were going the speed of light?)

The theory of relativity does not say that man cannot travel faster than the speed of light, it merely says that no one on earth can see it. The quantity C is not a factor of absolute limit. It is a limiting factor only with respect to two given reference points, and it is perfectly possible to conceive of a series of consecutive reference points between each two of which a differential equal to the quantity C may exist. This fact becomes obvious in situations where a differential of C, the kinetic energy equivalent of the mass energy of matter, exists between the observer and the point which he is observing, the natural laws are recognized as suspended; or when the energy differential is in excess of C, the laws operate in reverse at that point. THIS SIMPLE CONCEPT MUST BE ADDRESSED AND ACKNOWLEDGED, TO PERMIT FURTHER ADVANCES  IN ENERGY EVOLUTION.

RUNNING FROM FUNDAMENTAL REALITY SHOULD NOT BE THE NATURE OF MODERN SCIENCE. THE NATURAL LAWS ARE CURVED, NOT THE SPACE. Silence or ignoring the larger version of natural laws effect at C, and beyond C, between any two reference points, no longer suffices as a solution.

Imagine had we limited reality to our ears and the sound barrier.  In the same way, our field of vision, which depends upon the definition of light, should not limit reality to light speed between any two reference points. We do have other senses beyond the initial five to scientifically inquire into the nature of reality..... mathematics, imagination, intuition, merging mirco, meso, macro discoveries, along with advanced technologies which greatly extend our senses ...... all which concisely lead toward the above clearer relationship between matter and light.

Revisit the skipped fundamentals (bottom of post), presenting a 3d version of E=MC2, and note how the Nature of Reality, and our views of space, time, and gravity also greatly expands.

Hopefully, some of these fine institutions will eventually ask the question.

Welcome inside the Perimeter

There’s a universe of ideas to explore – from quantum to cosmos – at InsideThePerimeter.ca.